This year, McGill University held its first lavender graduation ceremony - a ceremony that honors and empowers students from the LGBTQ+ community. 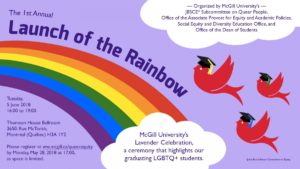 In an article for the Montreal Gazette, journalist Brendan Kelly spoke with Michael David Miller, chair of the organizing committee of The Launch of the Rainbow.

“'I like the idea of highlighting students who may have had a more difficult time at university,' said Michael David Miller [...]. 'We do that with our First Nations students at McGill. It’s beautiful because they often experience a huge culture shock when they come to university.'"

To get more information, visit the McGill website here.