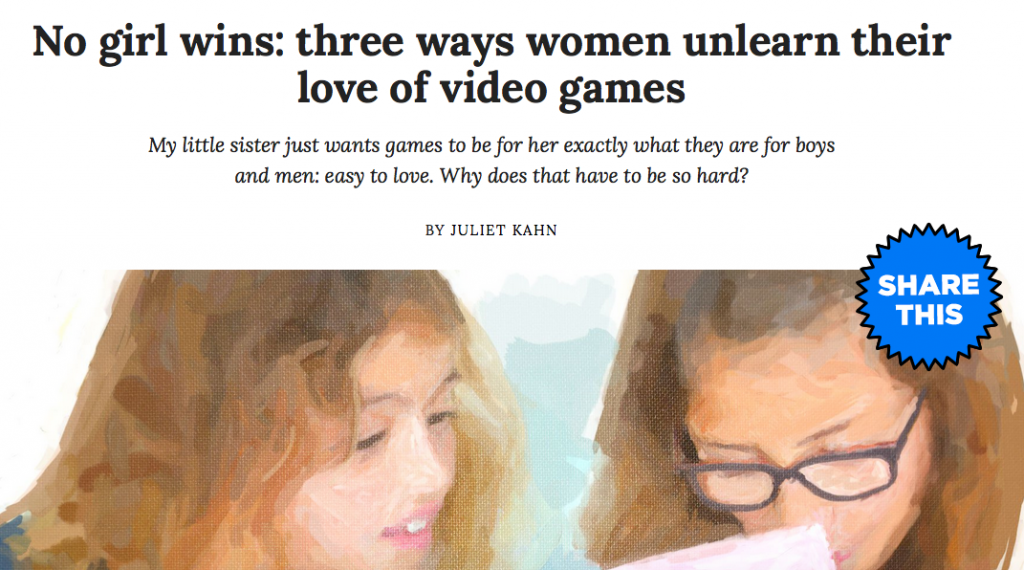 There are a couple of points I found interesting about this article:

1- the realization from the sister in high school that she did not "grow" out of video games; she had been "gendered" out of them.

2-The second thing reminds me of an experience I recently had at a bike store. I was cycling down a pretty steep hill when the brake cable broke. I remembered a friend mentioning a tiny bike store on my route and decided to see if they could fix it. Now I hate going to bike stores, mainly because my experience talking to the people who work in them has been intimidating verging on downright condescending. But this experience was notable for the fact that it was the total opposite. The repair guy did not make me feel like an idiot for having a beat up old bike with a milk carton perched precariously on the rear rack, or for riding around with  broken brakes (ok. Maybe he should have...) He fixed it right away and even walked me through the different expenses. That bike store now has a customer for life.

Similarly, a simple design hack is right here in this article:

“Maybe if they developed games for all interests,” she says tentatively. “Stuff like the games I liked when I was little, but... grown up. Games about everything. And if the stores especially were just more friendly? [I added the bold] And less sexual. Less violent.” She pauses. “You need to make people want to come in, you know? Girls want to be comfortable there. They don’t want to go in and be surrounded by that kind of female nudity.”