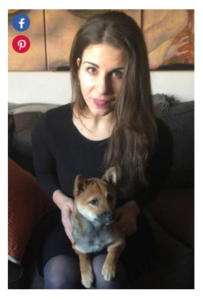 Lauren Duca has gotten some pretty nasty messages as a woman with an opinion, but especially since she wrote a piece about Trump. But as she points out, it doesn't have to be political to be triggered online:

"I did a couple of things that agitated the internet’s underbelly over the past month. My op-ed “Donald Trump is Gaslighting America,” subsequent appearance on Tucker Carlson Tonight on Fox News, and Twitter’s banning of Martin Shkreli for his own round of high-profile trolling in response to the segment have each been their own niche target. Those are all relatively political, or at least related to the political, but that doesn’t necessarily matter. A friend of mine received her own set of vitriol in response to a popular video of her singing the alto part of “All I Want for Christmas Is You.” Harassment doesn’t have too many requirements beyond “being a woman online.”

I also like the way she talks about being a "warrior goddess" and her refusal to be cowed as well as a "triggered snowflake" where though she refuses to quit having an opinion online, the words still are hurtful and above all scary:

"I’m a warrior goddess, who can weather the worst of the misogynistic treasure trove, calling out explicit sexism, and slicing open stealthier versions, usually with a witty aside about your poor use of grammar. (Do they not teach contractions anymore, or… ?) I’m also human. I don’t know if this means I’m a “triggered snowflake,” but I’m not embarrassed that mean things make me feel bad. Burying pain under a too-thick layer of irreverence can only dull the feeling for so long. I can take it, and I will continue to take it, in part because a presence online is part of my job. That doesn’t mean it’s OK."